And Then Everyone Was A Fascist: Why The British Anti-Islamisation Debate Needs To Drop The Term 'Fascism' 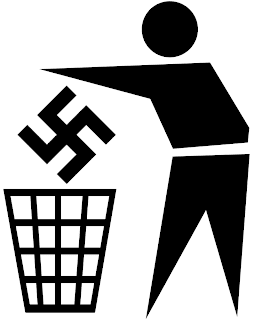 A month ago, a member of the British Army named Lee Rigsby was brutally murdered on Wellington Street, Woolwich by a pair of religiously-motivated madmen. It was only through the efforts of a few extremely brave members of the public that the body count was not any higher. Rigsby was, by all accounts, an extremely nice bloke who did not at all deserve the senseless fate that was delivered to him.

The murder of a soldier at the hands of Islamic militants has had the effect one might have expected.

Namely, a shitstorm has erupted.

On one side we have the Anti-Islamists, represented in its extremes by groups like the English Defence League or parties like the British National Party. They are calling for an end to what they perceive to be the spread of Islam throughout society, and they aren't afraid of using violence to achieve this end. The opposition to this standpoint (let's call them the Anti-Anti-Islamists, because it looks and sounds hilarious) claim that the situation is being massively over-exaggerated and that it is unfair to judge an entire group by its extremes. These guys are represented by groups like Hope Not Hate, and in its extremes by Unite Against Fascism.

Now, I'm going to do my best to remain as on-the-fence on this topic as possible with this post, because it isn't my intention to discuss the relative merits of either side and their arguments. I'm writing this because I take quite a big issue with the language both sides use. And by language, I mean one specific term.

Because seriously, guys, you all need to stop bandying around the word 'fascism'.

Fascism is a term for a very specific form of ultra-right political nationalism, emphasising strong leader figures and the “mass mobilisation of the national community” (cheers Wikipedia). It's a form of rule that rose to prominence in the 20th Century, with countries like Italy being taken over by fascist parties during this time and with small fringe groups like the British Union of Fascists existing in countries like the UK. The most notorious example, of course, is Germany's Nazi state that existed between 1933 and 1945: when people talk of fascism, its this state and all the negative connotations that come with it that springs to mind.

Fascism isn't a buzzword. Fascism isn't all radical-right political theory. Fascism isn't everyone who doesn't think exactly the fucking same as you. It's a proper political term that represents a specific ideology but these days is instead being misused by every man and his dog, regardless of where they sit on the political spectrum.

So let's single out each side in turn and explain to them why they should stop misusing this word.

Dear 'Unite Against Fascism'. You're not opposing fascists, unless Nick Griffin has recently developed an obsession with corporatism whilst I wasn't looking. The days when there were openly-fascist groups and parties operating in the UK have long since ended; even the National Front has since shifted its focus to a brand of ultra-nationalism. Far-right movements? Yes, those you are opposing, but the use of fascism in your very name indicates a complete lack of understanding towards the thing you say you're opposing, which makes you guys look more than a little silly.

Dear Anti-Islamists. There's no such fucking thing as 'left-wing fascism'. That's a paradox that ranks up there with “a very dry rainforest”. If you were to start talking about 'left-wing extremism', then you might well find yourself onto something, because such a thing most certainly exists and I'm sure some of you guys have been the victim of it at times. But tacking 'fascism' on the end of something to try and make a point not only suggests you have absolutely no idea what the hell you're talking about, it just seems childish and unnecessary.

Which bring us to my central point. In debates like the one currently raging about Islamophobia and the Islamisation of Britain, fascism is no longer being used to make a legitimate point. It's being used to stifle discussion, to shut down communication. “Oh, you hold an opposing view-point to me? Well, you're a fucking Nazi, mate” is essentially what people are doing when they bandy the term about.

This discussion's important. It needs to happen, and we need a decent consensus on how to answer it. So tactics such as everyone calling everyone else a fascist is doing nothing but increasing the rhetorical nonsense and ensuring that we take even longer to come up with an answer.

Why Having Religious Friends as an Atheist is Awesome

David Hume was not a fan of the ol' faithful.

His controversial stance on religion led him to be very nearly charged with infidelity by the Church of Scotland, and he was a vocal opponent of anything that he deemed to be overly 'clerical' in society. He ripped the Argument from Design into very small chunks with his posthumous Dialogues Concerning Natural Religion, and his views led him to be denied a career as an academic, forcing him to make a living as an essayist.

Yet Hume was also a very amicable fellow. His friendly nature and disposition led to him being nicknamed “la bonne David” by his friends in France, many of whom were in fact priests and other religious figures. Where he saw views and issues he was willing to make his argument heard and call out what he disapproved of, but he could also maintain friendships with those who held differing opinions from himself despite this.

Now, Hume was likely not an atheist: philosopher Stewart Sutherland places him on the scale of belief as a sceptic and possible agnostic. But that doesn't mean that we atheistic types cannot learn a thing or two from his stance towards theistic friends and acquaintances. The ability to denounce what we see as wrong or dangerous yet also maintain our candour is something I do feel is lost sometimes on modern atheists: there does seem to be a bit too much of “you're stupid, your opinions are stupid and I don't talk to stupid people” going around, rather than the more amenable “your stance on that issue is pretty fucking stupid I've got to say, and here's why I think so. But hey, how 'bout them Lakers?”

Talking religion with atheist friends when you yourself are an atheist tends to just turn into an echo-chamber; of course no-one's going to disagree or put forth an alternative, you're all on the same wave-length. Introduce a friend who's of a religious persuasion, however, and now you've got yourself a discussion on the go. Nobody learns anything by nodding along and agreeing with each other: we learn through debate, through rational discourse and discussion. You're probably not going to sway many hearts and minds, but it will teach you how to better express your viewpoints, and it could well teach you a thing or two about what you truly think as well.

Being able to defend your ideas under fire really focuses your mind on what those ideas are.

I'm not saying go out and get chummy with a Pentecostal or a Young-Earther (not unless you like a challenge, or rigorous debates with brick walls), but most religious folks aren't of the extremist persuasion: they're just regular people like the rest of humanity who hold beliefs contrary to your own. Misguided beliefs in your mind, sure. Hell, maybe even stupid beliefs. Just remember that you could be wrong, and that they probably think the same of you. Nobody wants an echo-chamber, at the end of the day. Echo-chambers are dull as shit, unless you know a really good ventriloquist.

Having friends you can properly debate against, though? They're worth having.
Posted by Unknown at 00:23
Why Having Religious Friends as an Atheist is Awesome
2013-06-06T00:23:00+01:00
Unknown
atheism|religion|
Comments

Back In The Saddle

Exams are over, real life is looming menacingly on the horizon, and I'm no longer off visiting Europe, so normal updates to this here blog can resume. Sorry for the wait. I'm looking forward to getting back to it now that life isn't throwing quite so many distractions at me.

In the meantime, here's a sweet video of a particularly awesome thinker and populariser of science, discussing the Big Bang. Miss you, Carl.

Email ThisBlogThis!Share to TwitterShare to FacebookShare to Pinterest
Labels: uncategorised

The Sceptic’s Guide To Spotting Bullshit


The internet is packed with bullshit.

There’s a whole range of nonsense to be found, thousands of sites devoted to woo, and entire corners of the web devoted to crack-pottery. In lieu of a more thought-out, extensive post I thought I’d throw together a list of a couple things that can very often be indicators to the fact that the website you’ve stumbled upon is spouting bullshit.

If you guys have any further points you’d like to add to the list, feel free to mention them in the comments.
Posted by Unknown at 15:35
The Sceptic’s Guide To Spotting Bullshit
2013-05-26T15:35:00+01:00
Unknown
conspiracy theory|moon landings|scepticism|
Comments