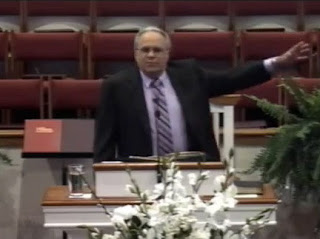 It’s been a bad month for fans of basic human rights in North Carolina.

Early in the month the state became the thirty-first to issue a Marriage Protection Amendment (it’s amazing how well they manage to dress up a ban on homosexuals getting married, isn’t it?), and what is particularly worrying is the amount of Bible-thumping the proponents of the ban seem to be guilty of.[1] The founding fathers would be turning in their graves if such a thing were possible, and homosexuals living in North Carolina no doubt feel further isolated and alone in their increasingly homophobic communities thanks to this deplorable piece of legislation.

Yet it seems that the lovely Pastor Charles Worley feels that they have not suffered enough. And he has an even lovelier plan in mind for how to “deal with” homosexuals:

“Build a great big, large fence - 50 or 100 miles long - and put all the lesbians in there. Fly over and drop some food. Do the same thing with the queers and the homosexuals - and have that fence electrified so they can't get out. Feed 'em. And you know in a few years, they'll die out. You know why? They can't reproduce.”[2]

No, I’m not making that up. I wish I was, but I’m not. Charles Worley stood up in front of his congregation and said that. Don’t believe? Just watch the video and experience the stupidity and ignorance for yourself in its full, unadulterated glory.

The overwhelming ignorance, stupidity and unpleasantness of such a statement can be pretty hard to process; I find it absolutely baffling that a fellow member of my species could stand up in front of people and say such horrible things. Yet this phenomenal bigot apparently has a history of making such remarks; in 1978 he was lamenting the fact that you could no longer hang homosexuals “from a white oak tree”.[3] I guess that it is good to know that Worley is a consistent asshole if nothing else.

One can easily draw parallels between Worley’s suggestion and the death camps of the Third Reich, and this is not the first time the suggestions regarding homosexuality by religious officials have drawn such comparisons; in 2008 Peter Mullen suggested we brand homosexuals with tattooed health warnings.[4] Perhaps a serial number would be better, Mr Mullen? And Mr Worley, maybe you could dress the “lesbians and queers”, as you call them, up in striped clothing when you lock them up in your not-concentration camps? Or better yet, the pair of you could just embrace the whole thing and start wandering around in SS uniforms; that seems to be what you are going for, after all.

Gay marriage should not be this big of a deal. We are not campaigning for the right to get married in churches; you guys are welcome to your little ‘no gays allowed’ club. We are campaigning for ‘civil marriage’, something which religion should have no factor in. This is a basic human right; why should homosexuals be treated differently from anyone else? You are not ‘protecting the sanctity of marriage’, you’re ruining something beautiful for two people who love each other. What damage can gay marriage do to this ‘sanctity’ you bang on about that Rush Limbaugh’s four marriages[5] and Britney Spears’ fifty-five hour marriage have not done already?

People like Charles Worley can be allowed to make such statements unchallenged. He has a right to say such horrible things, certainly, but we have the right to call him out on being such an unpleasant human being. There are several ways in which you can help do so. If you’re in North Carolina the Catawba Valley Citizens Against Hate group are planning to peacefully protest outside Worley’s church, the Providence Road Baptist Church, on Sunday the 27th; go along and lend your voice to the cause.[6] If you’re not so close but still want to do something you can still lend your support to the group, and you can help further by raising awareness of Charles Worley and the sort of things he is saying; share the video with your friends, your Facebook feed, your Twitter followers. Let the world see what an unpleasant person this guy is.

If you are a decent person you should not be willing to stand idly by and let this sort of thing be said.
[1] http://www.voteformarriagenc.com/2012/05/north-carolina-becomes-31st-state-to-adopt-marriage-protection-amendment/
[2] https://www.youtube.com/watch?v=d2n7vSPwhSU
[3] http://www.goodasyou.org/good_as_you/2012/05/pastor-worley-in-1978-forty-years-ago-they-wouldve-hung-homosexuals-bless-god-from-a-white-oak-tree.html
[4] http://www.telegraph.co.uk/news/religion/3145269/Homosexuals-should-carry-warning-tattoos-says-chaplain.html
[5] http://en.wikipedia.org/wiki/Rush_Limbaugh#Personal_life
[6] https://www.facebook.com/CatawbaValleyAgainstHate
Posted by Unknown at 03:14