From What I Understand From Science, the Doctor Akin Referenced Is Crazy Too 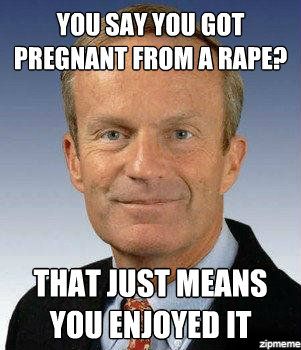 It must really suck to be Todd Akin right now.

After all, it’s not everyday that you practically kill your bid for the Senate in one massive political snafu.

Yet the fallout from the remarks he made about rape on Sunday continues to hurtle down like meteors. He’s been condemned by both Obama as well as Romney and Ryan, not to mention the fact that the story’s gone viral; give it a few more days and most people with an internet connection will be associated the name ‘Akin’ with ‘sexist twat’.

If somehow you’ve missed this merry little clusterfuck unfolding, here’s the breakdown; Akin, Missouri nominee for the Senate and Republican, appeared on a talk show and had his to say about abortion and rape:

“People always try to make that one of those things, ‘Oh, how do you slice this particularly tough sort of ethical question’… It seems to me, first of all, what I understand from doctors is that’s really where—if it’s a legitimate rape, the female body has ways to try to shut that whole thing down.”[1]

Why yes, that nice Republican nominee did indeed just state that women don’t usually get pregnant from proper rapes; the particularly nasty subtext of this statement is that he’s implying any woman who does get pregnant from rape somehow deserved it. Let’s not get into what a horrible idea categorising rape is; Obama’s got me covered on that one, actually.

Let’s instead return to those doctors Akin was talking about.

Turns it it’s probably just one doctor; Dr. Fred Mecklenburg, to be precise. In 1972 he wrote an article entitled ‘The Indications for Induced Abortion: A Physician's Perspective’, which has since been the cornerstone of many an anti-abortionist’s repertoire. It’s from this article that the belief that a woman exposed to the trauma of rape “will not ovulate even if she is ‘scheduled’ to” comes from.[2] The article claims that a pregnancy resulting from rape is “extremely rare”, apparently because the trauma a woman suffers during such an attack prevents it from occurring.

‘Quite an extraordinary claim he has there’, I hear you understating, ‘what evidence does the good doctor have to back it up?’

Not a whole lot, you’ll be unsurprised to learn. Mecklenburg cites a couple of statistical examples (got to love a good bit of statistic-ing) from the city of Buffalo, NY, which at the time had apparently not had a pregnancy from a confirmed rape in decades; such evidence can be dismissed because rape is one of the most under-reported crimes out there, rendering many associated statistics pretty unhelpful.

Probably the strangest, and easily the most controversial, evidence Mecklenburg gives would be evidence apparently gathered by Nazi scientists in concentration camps. No, seriously. Nazi scientists working in death camps. To quote from Raw Story:

“Nazis reportedly tested the theory “by selecting women who were about to ovulate and sending them to the gas chambers, only to bring them back after their realistic mock-killing, to see what the effect this had on their ovulatory patterns. An extremely high percentage of these women did not ovulate,” the article said.”[4]

Admittedly arguments stand or fall based on their merit alone, but you have to admit that there’s something really unsettling and distasteful about citing evidence garnered from death camps.

Akin quoting this as his source for his bizarre and unpleasant views just damages his case further.