Ever since we first put a man on the moon, some people have spent a lot of time trying to claim that we didn’t.

Likely first initiated by Bill Kaysing, a NASA librarian who wrote the book ‘We Never Went to the Moon’, the moon landing hoax movement is still prevalent to this day;[1] as late as 2001 Fox TV (a wonderful, reliable and totally unbiased source of news, information and opinion) was broadcasting documentaries entitled Conspiracy Theory: Did We Really Land on the Moon?[2]

Verification of these landings that are conclusive enough to satisfy most people has been notoriously difficult; in 2009 there was “tantalizing evidence the flags from Apollo 17 was still standing, but the images were just barely too fuzzy to know for sure”.[3] A frustrating experience for everyone involved but fear not, because just three years later we might finally have some verification.

Just a few days ago the Lunar Reconnaissance Orbiter Camera captured the pictures shown below: 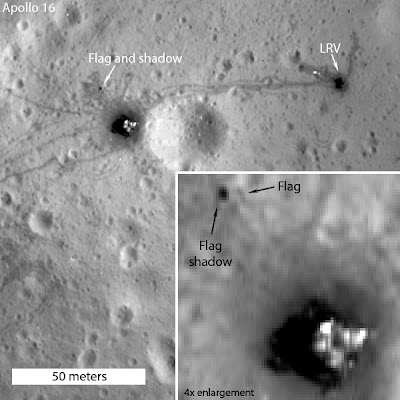 Turns out the landing site of Apollo 16 is still very much still there; even the footprints and the flag.

Some pretty impressive stuff, all in all, and some very solid evidence to show that we did indeed make it to the moon.