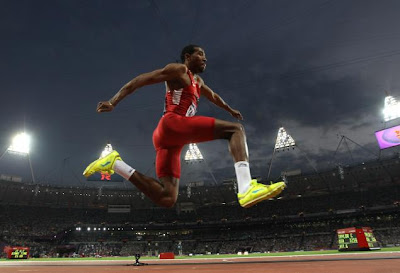 Given that the Closing Ceremony of the London 2012 Olympics wrapped up over a day ago this post is perhaps a bit late, but timeliness has never been my strong point.

So here’s a post about the Olympics, you unlucky people.

Despite my confusion regarding it, religion is often a big part of sport. Just look at all that bollocks with Tim Tea-face or whatever he was called and you’ll notice that a lot of athletes to often hold a serious connection with god. I found myself contemplating this as I watched Christian Taylor interviewed after winning a Gold medal in the Triple Jump event.

This is a chap at the peak of human physicality, an athlete who’s at a standard where he can take a Gold at an Olympic event (which is to say, he’s extremely strong). Reaching such a stage has taken months of painstaking hard work. The training and practice, the blood, sweat and tears that this guy has put in is nothing short of incredible. He’s had the unflinching support of people like his coach, who’s urged him on through the darkest hours of self-doubt and desperation, and his family, who’ve likely (I’m not pretending to know this guy, don’t get me wrong) been there with him since the start.

And yet the first thing Taylor says on camera after winning is “how blessed” he is, and how he thanks god for his victory.

I just can’t feel that he and the athletes like him are selling themselves short when they make statements like that.

God didn’t put all those hours of training and practice in; Taylor did. God wasn’t the guy training him, urging him on all the way; that was Taylor’s coach. All in all, god really didn’t do much in Taylor’s training and racing, so it’s confusing as to why he’s the first person thanked in the victor’s interview. Surely there’s far more worthy candidates deserving of mention?

I’m sure there were plenty of people competing in that event who prayed long and hard, yet it was Taylor who won. That’s note because god has favourites, that’s because Taylor was the better athlete. He personally put in the work, he personally was the better competitor, and thus he won. I’m all for modesty, but if ever there’s a moment to be vaguely chuffed with yourself it’s when you’ve just taken the Gold.

Don’t get me wrong, I’m fully aware that this is just a personal opinion. I’m sure Taylor derived a considerable amount of confidence in thinking that god had his back during the long hours of training. It’s just I think it’s a shame these guys are giving away all the credit to some deity who just sat there and watched impartially.